TEESSIDE’s heart unit is marking a milestone anniversary after 30 years of delivering state-of-the-art care to patients with cardiovascular disease across the region and beyond.

Professor Sir Liam Donaldson, chair of the NHS North East and North Cumbria Integrated Care Board, officially kicked off the celebrations at The James Cook University Hospital with a tour of its cardiology and cardiac surgery services. 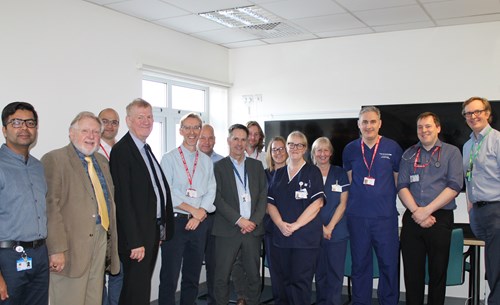 It was 20 January 1993 when the first cardiac catheterisation laboratory was officially opened at what was then South Cleveland Hospital while the first cardiothoracic surgery was performed in 1994.

Sir Liam was the regional health chief at the time and played an instrumental role, alongside former consultant cardiologist Adrian Davies, in bringing the heart unit to Middlesbrough, which 30 years ago had some of the poorest heart health rates in the country alongside some of the worst access to treatment.

Thirty years later the unit is leading the way when it comes to using the most advanced technologies and pioneering procedures, including:

And the service continues to go from strength to strength with the recent launch of a fundraising appeal to develop a dedicated cardiothoracic research facility on the James Cook site.

Sir Liam said: “It is wonderful to see this service 30 years on and humbling to witness the dedication of the staff. Not only is the service providing specialist care closer to home but it continues to pioneer the most state-of-the-art treatments for the benefit of patients across Teesside, North Yorkshire and beyond.

“In the three decades since heart care came to Middlesbrough, The James Cook University Hospital has of course become a nationally recognised centre for other specialist care including cancer, neurosciences, cochlear implants, gynaecology and major trauma care to name but a few.

“The hospital’s role in providing this type of highly specialised care is important in ensuring it is available to patients across our region and the local communities of Teesside and North Yorkshire.”

Andrew Sutton, consultant cardiologist and clinical chair for cardiothoracic and vascular care services, added: “We have achieved so much over the past 30 years - from halving hospital mortality from heart attacks in Middlesbrough when we started a primary angioplasty service; to fitting more than 11,000 pacemakers; to pioneering some of the most advanced robotic surgery techniques.

“And there’s more exciting times ahead as we look to open our cardiothoracic research facility which will enable the trust to become an internationally recognised centre of excellence in cardiovascular research as well as leading the way across the north east region.”

Hearts and Minds is a joint appeal by Our Hospitals Charity and South Cleveland Heart Fund to raise £650,000 to bring first class cardiovascular research facilities to Teesside. Find out more at southtees.nhs.uk/charity/campaigns/hearts-and-minds/